A Time to Clean: 30 Day Challenge

Monday: When You Feel Unlovable

WHEN YOU FEEL UNLOVABLE 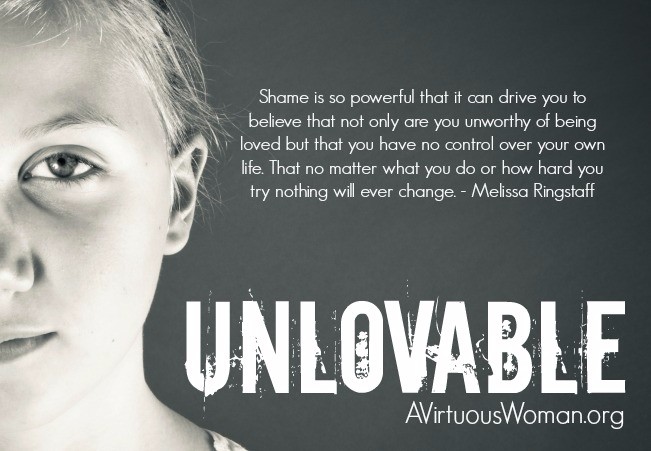 If you look up the definition of shame, you'll find these words: "a painful feeling of humiliation or distress caused by the consciousness of wrong or foolish behavior."

But, shame is more than a feeling of guilt. It goes deeper than the idea that you've done something wrong. For the woman who bears a mark of shame, it's like the scarlet letter - an almost tangible feeling that she's not worthy of being loved.

Dr. Brene' Brown said it well, "Shame is the intensely painful feeling that we are unworthy of love and belonging."

When You Feel Unlovable

I can personally testify to what shame did in my life and I know I'm not the only woman who has looked in the mirror and wished she was someone else.

As a child I was picked on and teased unmercifully. I was teased everyday by nearly everyone in my class for years. I was the child who didn't fit anywhere.

And when I looked in the mirror, I agreed with the world. I was ugly. I was unlovable. I was unwanted. I was nothing. Nothing worth having.

Because I believed I was unlovable, I felt a desperation - a deep longing and need - to be loved by someone. Anyone.

I didn't know what it really meant to be loved by Christ. I only knew how much I desired to be loved and accepted by the people around me, by the world.

I never fit in. My heart was more than insecure, it was damaged and broken. Shattered by the cruel voices that taunted my every moment.

I never fit in with kids my own age. And then I became a mother. Pregnant at the tender age of 14. I felt shamed. Every where I went I could feel the stares, the questions, the assumptions, and the judgments.

The shame lasted. Continued for years, even as I attended church as a 19 year old mother of two. I didn't fit in with the soccer moms in their thirties. I didn't fit in anywhere I went. And after two decades of rarely having friends, and never having lasting friendships, of struggling to talk to people, of always feeling ugly and unlovable... I was still desperate for someone, anyone to love me.

By the time I was 21, I was a divorced mother of three. A young mother with no education, no husband, no job, no home of my own.

Shame was who I was.

Your story may be different from mine, but when you look in the mirror all you can see is your shame. So many circumstances can cause us to feel shame - being bullied at school, abuse from your father or indifference toward you by your mother, or even choices you've made - drugs, alcohol, sex, abortion.

Shame is so powerful that it can drive you to believe that not only are you unworthy of being loved but that you have no control over your own life. That no matter what you do or how hard you try nothing will ever change.

Shame can leave you feeling powerless.

Jesus came to save us from shame. He was shamed and scorned so that we can live forever with Him who will never shame us.

There's a story in the Bible of a young woman, who was caught in the act of adultery and drug out into the streets to be publicly shamed.

Imagine for a moment this scene. There's this young woman, probably naked or barely covered, her sins have been exposed and there are elders - prominent men who are respected in the community mocking her, judging her, ready to kill her. She's overwhelmed, broken, terrified that this will be the story of her life.

That this will be her story.

And Jesus comes to her rescue and He tells the mockers and haters to leave her alone.

"Jesus went across to Mount Olives, but he was soon back in the Temple again. Swarms of people came to him. He sat down and taught them. The religion scholars and Pharisees led in a woman who had been caught in an act of adultery. They stood her in plain sight of everyone and said, “Teacher, this woman was caught red-handed in the act of adultery. Moses, in the Law, gives orders to stone such persons. What do you say?” They were trying to trap him into saying something incriminating so they could bring charges against him. Jesus bent down and wrote with his finger in the dirt. They kept at him, badgering him. He straightened up and said, “The sinless one among you, go first: Throw the stone.” Bending down again, he wrote some more in the dirt. Hearing that, they walked away, one after another, beginning with the oldest. The woman was left alone. Jesus stood up and spoke to her. “Woman, where are they? Does no one condemn you?” "No one, Master.” “Neither do I,” said Jesus. “Go on your way. From now on, don’t sin.” John 8:1-11 {The Message}

Neither do I condemn you.

Your past is your past. You can't change it. It's time to own your own story and claim victory in Christ. Because the ending to your story doesn't stop at yesterday. You have today. You can choose today to claim the promise of forgiveness and redemption through Jesus Christ. He is the way, the truth, and the life.

He is all powerful where you feel powerless.

When our past is colored by shame, every failure, every imperfection is magnified. We can't see past our shame until we choose to be set free. As a wife and a homemaker I'm only now beginning to be okay with my imperfect self and yet I still struggle with it! When we hold onto shame, our homes suffer because we can't find the joy in the mundane because it's all colored with imperfection and shame.

This doesn't have to be your story.

What is your story?